Varroa destructor and Varroa jacobsoni are parasitic mites that feed on the bodily fluids of adult, pupal and larval bees. Varroa mites can be seen with the naked eye as a small red or brown spot on the bee's thorax. Varroa mites are carriers for a virus that is particularly damaging to the bees. Bees infected with this virus during their development will often have visibly deformed wings. 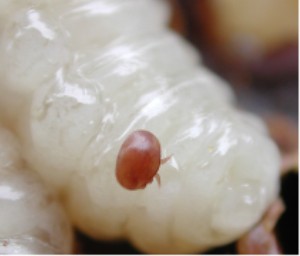 Varroa mites have led to the virtual elimination of feral bee colonies in many areas, and are a major problem for kept bees in apiaries. Some feral populations are now recovering—it appears they have been naturally selected for Varroa resistance.

Varroa mites were first discovered in Southeast Asia in about 1904, but are now present on all continents except Australia. They were discovered in the United States in 1987, inNew Zealand in 2000, and in Devon, United Kingdom in 1992.

These mites are generally not a problem for a strongly growing hive. When the hive population growth is reduced in preparation for winter or due to poor late summer forage, the mite population growth can overtake that of the bees and can then destroy the hive. Often a colony will simply abscond (leave as in a swarm, but leaving no population behind) under such conditions.

Varroa in combination with deformed wing virus and bacteria have been theoretically implicated in colony collapse disorder.

A variety of treatments are currently marketed or practiced to attempt to control these mites. The treatments are generally segregated into chemical and mechanical controls.

Common mechanical controls generally rely on disruption of some aspect of the mites' lifecycle. These controls are generally intended not to eliminate all mites, but merely to maintain the infestation at a level which the colony can tolerate. Examples of mechanical controls include drone brood sacrifice (varroa mites are preferentially attracted to the drone brood), powdered sugar dusting (which encourages cleaning behavior and dislodges some mites), screened bottom boards (so any dislodged mites fall through the bottom and away from the colony), brood interruption and, perhaps, downsizing of the brood cell size. A device called the varroa mite control entrance (VMCE) is under development as of 2008. The VMCE works in conjunction with a screened bottom board, by dislodging varroa mites from bees as they enter and exit a hive.[4]