Aethina tumida is a small, dark-colored beetle that lives in beehives. Originally from Africa, the first discovery of small hive beetles in the Western Hemisphere was made in St. Lucie County, Florida, in 1998. The next year, a specimen that had been collected from Charleston, South Carolina, in 1996 was identified, and is believed to be the index case for the United States.[8] By December 1999, small hive beetles were reported in Iowa, Maine, Massachusetts, Minnesota, New Jersey, Ohio, Pennsylvania, Texas, and Wisconsin, and it was found in California by 2006. 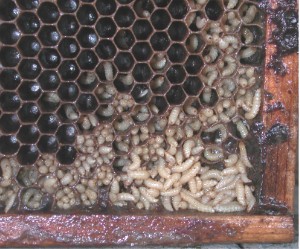 The lifecycle of this beetle includes pupation in the ground outside of the hive. Controls to prevent ants from climbing into the hive are believed to also be effective against the hive beetle. Several beekeepers are experimenting with the use of diatomaceous earth around the hive as a way to disrupt the beetle's lifecycle. The diatoms abrade the insects' surfaces, causing them to dehydrate and die.

Several pesticides are currently used against the small hive beetle. The chemical fipronil (marketed as Combat Roach Gel [9]) is commonly applied inside the corrugations of a piece of cardboard. Standard corrugations are large enough that a small hive beetle can enter the cardboard through the end, but small enough that honey bees cannot enter (thus are kept away from the pesticide). Alternative controls such as oil-based top-bar traps are also available, but they have had very little commercial success.