Galleria mellonella (greater wax moths) do not attack the bees directly, but feed on the wax used by the bees to build their honeycomb. Their full development to adults requires access to used brood comb or brood cell cleanings—these contain protein essential for the larval development, in the form of brood cocoons. The destruction of the comb will spill or contaminate stored honey and may kill bee larvae.

When honey supers are stored for the winter in a mild climate, or in heated storage, the wax moth larvae can destroy portions of the comb, though they will not fully develop. Damaged comb may be scraped out and replaced by the bees. Wax moth larvae and eggs are killed by freezing, so storage in unheated sheds or barns in higher latitudes is the only control necessary. 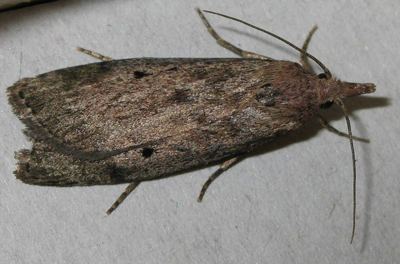 Because wax moths cannot survive a cold winter, they are usually not a problem for beekeepers in the northern U.S. or Canada, unless they survive winter in heated storage, or are brought from the south by purchase or migration of beekeepers. They thrive and spread most rapidly with temperatures above 30°C (90°F), so some areas with only occasional days that are hot rarely have a problem with wax moths, unless the colony is already weak due to stress from other factors.

A strong hive generally needs no treatment to control wax moths; the bees themselves kill and clean out the moth larvae and webs. Wax moth larvae may fully develop in cell cleanings when such cleanings accumulate thickly where they are not accessible to the bees.

Wax moth development in comb is generally not a problem with top bar hives, as unused combs are usually left in the hive during the winter. Since this type of hive is not used in severe wintering conditions, the bees are able to patrol and inspect the unused comb.

Wax moths can be controlled in stored comb by application of the aizawai variety of Bacillus thuringiensis spores by spraying. It is a very effective biological control and has an excellent safety record.[citation needed]

Wax moths can be controlled chemically with paradichlorobenzene (moth crystals or urinal disks). If chemical methods are used, the combs must be well-aired for several days before use. The use of naphthalene (mothballs) is discouraged because it accumulates in the wax, which can kill bees or contaminate honey stores. Control of wax moths by other means includes the freezing of the comb for at least 24 hours.